Being the highest point on this open grassland means lots of wind!

We finally started work on Project Merbok a few months back. One of the most important things we started with was to create windbreaks. You might ask: what’s wrong with enjoying a breeze in our warm humid climate? While a gentle wind helps with air circulation, too much of it causes many problems.

Top of the Hill – Only the Toughest Survive

Our approach to the wind problem was to create a multi-layered windbreak using a variety of plants. The most wind-tolerant plant would be positioned on the windiest area, which would be the highest point on site. There is a ridge running across the site and we will be planting Casuarina (Casuarina equisetifolia or Rhu) along it.

Casuarina is a hardy, fast-growing, sun-loving pioneer species. It is naturalised in many parts of the tropics. It tolerates poor soils and is found naturally along sandy coasts and mangroves. A tall tree, it can reach 30-40m height.

As mentioned in my previous post, the conditions are toughest at the top of the site. Strong sun and wind with such poor soil fertility that even lalang grass cannot grow. We are hoping that the hardy Casuarina can deal with it!

An additional advantage of the Casuarina is that it is a nitrogen-fixer. The roots form nitrogen-fixing associations with soil microbes. Putting this nitrogen-fixer at the top of the site means that the nitrogen in the soil would leach downwards and benefit the rest of the plants. Their copious leaf-fall add both nitrogen and carbon to the soil.

Interestingly, Jared Diamond mentioned the Casuarina tree in his book Collapse. The Casuarina has been planted extensively in the New Guinea Highlands by humans. Around 1200 years ago, the highlands became largely deforested by farming practices, but natives began growing Casuarina trees to maintain timber and fuel supplies. They grow them interspersed in food gardens to increase soil fertility and reduce fallow periods. New Guinea farmers claim that the trees reduce garden infestation with a taro beetle, and experience suggests that they are right! 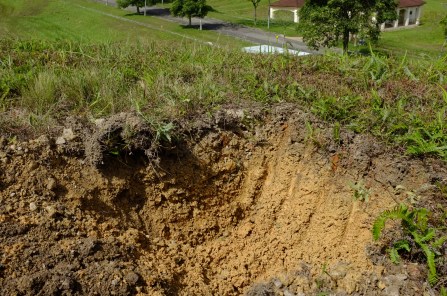 Planting holes for the casuarina dug by the excavator.

You can see that there is almost no topsoil here at the top of the hill.

A bale of rice straw for mulching that we left here for too long. Plants are growing on it!

Better soil mixed with compost for the planting job.

Casuarinas planted 4m apart, in 2 rows. It’s closer than usual but we wanted them dense to act as a windbreak.

The row of causarinas lined on the top of the ridge. They should look better with time!

Around the Edges of the Site

We also needed to break the wind coming from different directions into the site. There would be no fencing around the perimeter of the site so we would be using only plants as windbreak. The windbreak would also need to serve as a privacy hedge from neighbours, and dense enough to deter intruders. We initially proposed bamboo because of its construction uses. However the client was worried about maintenance with its rampant growth and leaf-fall. In the end we settled on the Eugenia (Eugenia oleina, or Syzgium campanulatum).

The Eugenia is actually a tree of the rainforest, native to this region. However it is quite hardy and commonly planted as an ornamental hedge plant in Singapore and Malaysia. The young shoots are reddish-orange and helps to add some colour to the landscape.

While digging the planting holes for the Eugenia, we realized the difference in soil quality compared to the top of the hill where we planted the Casuarina. Along the edges, lalang was growing quite happily and over the years have built up a modest layer of decent soil.

Compared to the photos above, the soil here has more humus.

Pulling the lalang apart, you can see that the soil is actually well protected from the elements. 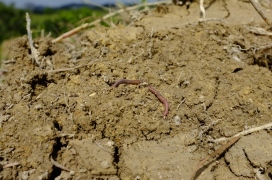 The long roots of the weeds help to drill holes into the compact soil for aeration and moisture.

The scarily strong excavator, a powerful weapon that needs to be used properly.

With the planting holes dug, we planted the Eugenias spaced about 90cm apart. There are many landscapers that plant them 60cm apart for that instant hedge effect. Actually, they can grow pretty wide apart and form a decent hedge even at 1.5m spacing.

With the windbreaks planted, we can now focus on the ponds, terrace, and food forest! More to come…