We are beginning to design and build a productive and pretty garden using permaculture principles on a 1.3 acre land in Johor Malaysia! The owner will be building a small house as a retreat for his company staff. This will be a place of relaxation with fruit trees, vegetables and herbs for visitors to harvest. There will also be ponds, small livestock (chickens, ducks, rabbits, bees), rainwater harvesting, and more.

The site is on a hilltop with a peak at 42m altitude. On the east, there is a gradual downslope to the eastern perimeter with a lowest point at 35m altitude. The gradient varies between 5 to 10 degrees. On the west of the peak, the downslope is slightly steeper with some parts reaching 20 degrees or more. The lowest point of the property is at 32m altitude at the western perimeter.

This place used to be an oil palm plantation many years ago. This means that it was most likely a monoculture with heavy use of chemicals. There isn’t much life left in the soil. You can tell by walking on it and observing the vegetation that grows.

The conditions are challenging. Firstly, the site is the highest point within a big area. Yes, the view is great but us humans but not that friendly for plants.

The neighbouring plots are all empty with only a handful of trees. Without a wind break for this hilltop location, the strong winds will dry out the plants (if it has not already caused mechanical damage to the structure).

The site gets full sun as well. With the strong wind and sun, it is no surprise that the main vegetation currently on the site is lallang grass (Imperata cylindrica). Lallang is a tall grass commonly seen at abandoned or disturbed land in Malaysia and Singapore. It thrives in poor soils and is a pioneer species in restoring fertility to the land. I recently read that lallang is actually edible and was a crisis food during the Japanese Occupation of Singapore.

“During the Japanese Occupation, the Japanese crammed five or six POWs (Prisoners-of-War) into one-man cells when there were more POWs from nearby regions. With such overcrowding, along with scarcity n food and medicine, disease and malnutrition were rampant.

A number of agriculturists and doctors at Changi POW camp accidentally discovered that lallang grass which was abundant, had a very high vitamin content. Carl Francis de Souza, a POW, remembered cutting lallang grass with his fellow prisoners (Wartime Kitchen, pg 80-81). The juice from lallang grass was extracted with an improvised electric grinder. Carl recalled, “Although it was ‘first-class vitamin’, it was green and tasted like grass!” Despite this fact, the lallang grass juice did mitigate the malnutrition situation amongst the POWs then.”

Lallang holding the fort on the steep slope

While commonly hated as a weed to most gardeners and farmers in this region, I see the importance of lallang in this piece of land. Other than providing vegetative cover on the depleted soil, the roots of lallang can grow up to 1.2m deep and is excellent at minimizing soil erosion. I also find it nostalgic of my army days seeing lallang sway in the breeze…

I note with interest the spots that even lallang do not grow. What does it say about the soil that even the hardy lallang is not able to survive? These spots tend to be at the top of the hill and are covered by some ferns. Looking underneath the ferns, I notice almost no soil and organic matter, only gravels. I suspect that all the soil and organic matter have already been eroded from this hilltop either by strong wind or torrential rain. 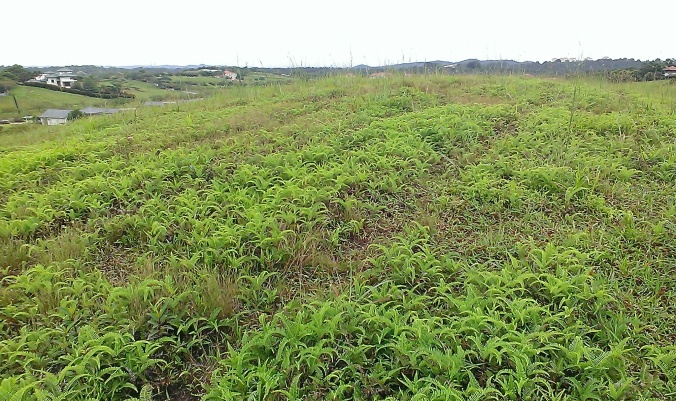 Derelict land that even lallang struggles to grow on.

Do you notice the tracks running across the terrain? I found out that grass cutting trucks are being driven over the site every few months to keep the lallang at bay. To me, that is simply humans trying to act against nature. Nature wants to restore fertility in the land to support more life. To do that, she uses lallang as a pioneer species to prepare the land for the next succession. The next succession would probably be some hardy low shrubs, followed by taller trees. Eventually, after many many years, this piece of land will be restored into a rainforest again. In this case, I guess humans have other plans for this piece of land. Maybe a big house, a lawn, or a swimming pool?

Only at the steep slopes is the lallang spared because the trucks are not able to drive across. Such is the irony of life! Having a desirable trait might invite an undesirable consequence. For example, you spend big to buy a nice flat piece of arable land at a scenic area to develop a retirement homestead only to end up with a high-rise hotel constructed beside you within a few years. Your friend up at the steep mountain struggles with soil erosion and the daily climb but is left untouched by development. 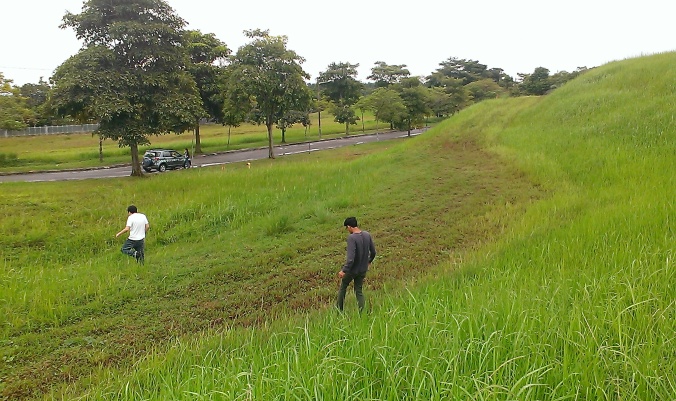 We will have more updates to come about the design followed by the build. You can look at all the posts about Project Merbok here.

8 thoughts on “Project Merbok – Pioneering on a Lallang Hill”