A relative of mine passed away recently. We were all saddened by her death, though I could not help but think about certain things during the funeral. I thought about how modern cultures deal with death and how that reflects their relationship with nature.

When we die, we chop down a big tree to make a big coffin. Other than the life of the tree, we are taking away lives that the tree is supporting. The birds with their nests gone, the squirrels that eat the fruits, the caterpillars that chew the leaves, the fallen leaves that feed the earthworms. In Chinese customs, the coffin is given much importance. For wealthy families, the coffins can be very big and made of quality wood. They require many bearers to carry. That is probably one of the many contributing causes to the lack of forests in southern China even during the 1900s (read F H King’s Farmers of Forty Centuries). Upon seeing the photo below, my mother told me that her grandmother had a coffin of that size during the 1980s in Singapore. Big trees were still abundant then, I guess.

Chinese traditions would call for a burial, but I guess that has changed in a place where land is scarce, like Singapore. The more conventional way now is cremation. The fire for cremation sometimes relies on wood, which is what I saw in the Kathmandu Valley of Nepal. The corpse to be cremated is laid on top of a stack of firewood. It was the same when I attended a Buddhist funeral at a village in Chiangmai Thailand, during my stay at a meditation farm. Music was blasting and the cremation was ignited by a fancy firework sequence. In Singapore, the coffins are pushed into furnaces that I believe are gas powered. It takes about four hours of burning to turn everything to ash. Ecologically, cremation is more wasteful than burial. Other than the firewood or fossil fuel needed for the fire, the corpse does not feed any organism and all that is left is a pile of ash.

Well, it isn’t too bad if the ash is returned to the soil as a fertilizer, right? In Kathmandu, the burnt remains of charcoal and ash are pushed into the flowing river beside the cremation spot. Children happily swim and play downstream! In Singapore, the ashes will be collected and put in an urn. Some families scatter the ash into the sea. However, for most, that urn will be stored in a columbarium stacked on shelves just like most Singaporeans living in high-rise flats. The ashes will be stored there for many, many years. Nothing is returned to nature to create new life. 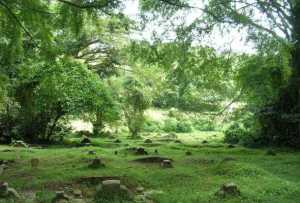 Burials can still take place in the outskirts of Singapore. In the past, cemeteries are known to be fertile grounds with all that good stuff (rotting wood and corpses) buried deep in the ground. Look at the lush vegetation at Bukit Brown Cemetery in Singapore, the biggest Chinese graveyard outside of China during its time. However, in modern times, cemeteries are a source of pollution and toxic. Someone who used to work in an environmental consultancy told me that while identifying environmental contamination at a site, they are most concerned about three types of neighbours: petrol stations, dry cleaners, , and cemeteries. The first two are known for their use of chemicals, but why cemeteries?

Embalming is the art and science of preserving human remains by treating them (in its modern form with chemicals) to forestall decomposition. When an embalmed corpse is buried, these toxic chemicals will leach into the soil eventually. Most Chinese would hold a wake for 3 to 5 days before the funeral for friends and relatives to come pay their respects. I guess embalming is required in our hot and humid climate. Interestingly, the Malays (Muslims) and Indians (Hindus) have to bury and cremate respectively as soon as possible after death. There is less of a need to embalm, and Islam law even prohibits embalming.

Compared to most modern funeral customs, the Tibetians and Mongolians use methods that are more ecological, albeit more gruesome to some. The Tibetians are known for their “sky burial” practice where they place human corpses in the mountains for carrion birds to feed on. Often times, they would hire a person to chop up the remains so that all of it can be devoured by the birds. I have read in Jiang Rong’s Wolf Totem that Mongolians believe the only way to get to heaven is if the wolves feed on their remains. The family members leave the corpse in the grasslands and pray that the wolves come quickly and leave nothing behind.

In disposing of human remains, there is generosity in giving life to other animals which is very much in line with their school of Buddhism. There is also the practical consideration that the ground is too hard and rocky there for burial. The scarcity of trees also means that cremation is not feasible. However, these practices are changing because the number of vultures and wolves has been falling.

I believe that our lives are borrowed from the community of life (borrowing from Daniel Quinn). Every molecule in us used to be another living thing not too long ago. Throughout our lives, we get sustenance by taking other lives, plants and animals alike. It is a loan that must be repaid when our time is up. We repay it by returning our remains back to nature. How nice it would to be buried naked in the ground and to have a tree sapling planted over you. We decompose in the soil, providing food to countless microbes and worms. We fertilize the grass, which is eaten by the rabbit, which is eaten by the snake. The tree draws nutrients from us, which it turns into green leaves, which are munched on by the caterpillar, which is eaten by the bird.

When our loved ones feel the tall grass graze their calves, or catch sight of the hiding snake, or hear the rustling of leaves or songs of the bird, they might think of us. We are no longer around but in some sense we are everywhere.

To seek permanence we have to be impermanent.

4 thoughts on “Till Death Do Us Part”