Siang Yu is a friend and fellow farmer at Edible Garden City. She is also an environmentalist and translator. She is currently on a sabbatical in Indonesia. People find it funny that we full-time urban farmers choose to go to farms during leave from work. Here is the first guest post about her trip…

Earlier in January, I went to Yogyakarta because I had heard that permaculture was gaining traction there and I wanted to see it for myself. Thomas and my colleague Imran briefly mentioned Bumi Langit to me once, and I thought it would be a good idea to visit them. Bumit Langit is founded by Iskandar Waworuntu in 2006. He had started a farm in Bali prior to this and I later learned from someone else I met while travelling that Pak Iskandar went to Sumatra to learn about farming. They were a little difficult to contact – I emailed them 2 weeks before I left for Jogja, but never got a reply. So I decided to wing it and found a driver when I arrived in Jogja who could take me and my friend Adiel to Bumi Langit in Imogiri directly.

At Bumi Langit, we met Mas Salas, the person-in-charge of the warung (shop/eatery), when we decided to have dinner there. After learning that I was interested in permaculture and was keen to volunteer with them, Mas Salas sat down with us and we had a very long and engaging chat about permaculture beyond agriculture – permaculture as a lifestyle. It was meeting a kindred spirit. We spoke about capitalism, the pharmaceutical industry and the poison that is television (and Indomie haha). He emphasised the importance of differentiating between human need and human greed. We could choose to fill our lives with junk that we are told we need or we could critically decide for ourselves what the things we truly need are. Rooted in the principles of Islam, Mas Salas said, “Whether we go to heaven after we die, that is decided by God. Why don’t you make your own heaven while you are alive?” 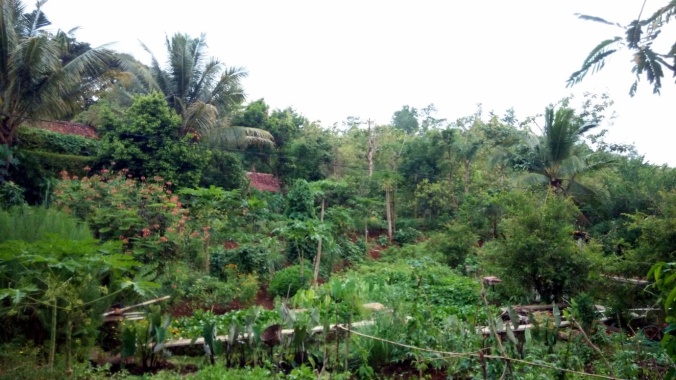 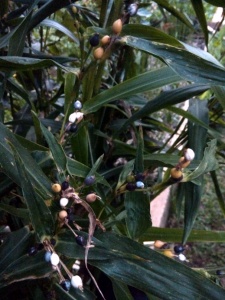 Mas Salas gave us a tour around the farm and we could immediately see the thoughtful design behind the land. The herb and vegetable garden is closest to the living quarters, and of course, they practise intercropping. Some plants I identified were bayam, sawi, tapioca, loofah, eggplant and jali – a rice substitute.

I was surprised to see that no mulch was used, because that is one of the things we emphasise in our gardens back in Singapore. Mas Salas explained that they simply add fresh compost to the top of the soil frequently and the weeds do not grow. They only mulch during the dry season to retain moisture. To deal with pests, they plant crops with colourful flowers which attract carnivorous insects, which in turn feed on the pests.

Next is the chicken coop. Before dinner, I was explaining to Adiel that although I’m a vegetarian now, I would eat meat from animals which were ethically reared. Mas Salas was very quick to assure me that all the chickens on the farm are “happy chickens”. Unlike broiler chickens in factories which are slaughtered at 28 days of age, the chickens here are slaughtered at approximately 4 months of age. They also have sufficient space to roam, although they are not allowed to roam freely around the entire farm. Kitchen scraps are fed to them and the chickens eat, scratch and break them down. The farmers then flip the pile for the chickens to repeat the process. The pile is then flipped one more time until the scraps are broken down finely and can be used as compost. Raised baskets are made for the hens to lay their eggs in. Some are taken for food and some are left for new baby chooks!

At Bumi Langit, they also produce biogas from human and animal waste. I didn’t get a good picture of the system, but waste is collected in a huge tank. The methane is then passed through a box that contains steel rods. This is so that all the corrosive reaction takes place in the box before the methane is sent to the kitchen through a pipe. This helps reduce the corrosion and charring of the pots and pans when cooking. The product is a blue flame. At this point, Adiel who is a chef said that he loves blue flames, so I guess this is a good thing. The by-product of biogas is odourless poop (we smelled it!) which is fed to the worms which are kept in large, reused bathtubs. The worm castings are then used for seed sowing in the nursery.

They are currently relying on diesel to generate electricity, but are slowly transitioning to solar energy. When I was there, they had already bought the solar panels.

Greywater is also harvested. Mas Salas illustrated how it is done, and this is my bad drawing to illustrate his illustration:

Water from the toilet and kitchen is passed through 3 types of material to remove the contaminants before it is released into the pond. Mas Salas explained that it is more effective to create a winding path instead of a straight path because more contaminants can be trapped. This is the same reason for using floating stones. In the last segment where floating stones are placed in the water, they grow water hyacinths and rear omnivorous (or mostly herbivorous) fish. The roots of the water hyacinth are not black, indicating a good supply of oxygen in the water. Mas Salas said that they rear fishes like gourami and nila instead of the carnivorous catfish because “You are what you eat.” The water hyacinths are then fed to the ducks. The water that ends up in the pond is green – a sign of living organisms! On dry days, water is pumped from the pond and used to water the garden.

There was a lot more to the 3-hectare land, but that was all Mas Salas could show us as it was already dark. He took us to the kitchen to show us some of their harvested produce. In the kitchen, they use a freezer with a top lid, as it is more energy saving. Heat is lost from the top while food at the bottom is still kept cool, whereas the temperature in a regular refrigerator rises every time we open the door because the cool air rushes out.

Unfortunately, Pak Iskandar was ill when I visited so I did not have the opportunity to meet him. Mas Salas was keen to have me on the farm, but unfortunately I wasn’t able to volunteer with them as there was a minimum volunteering period of 2 months. Regardless, Bumi Langit is a paradise for any permie, and I can only wish that I’d spent a longer time there.

To overcome my disappointment, I decided to visit my friend’s family in Wonosadi who plants rice. Unlabelled with the term “permaculture” which is fast becoming a buzzword, I learned valuable lessons and similarities from traditional farming techniques. Will share more in my next post!