We don’t usually think of our climate as seasonal. Since young, we read about frigid winters in storybooks, or watch movies with falling autumn leaves turning the ground red and yellow. But for us those scenes only happen in far away places. In our humid tropics we are blessed with relatively consistent temperatures and rainfall throughout the year. The grass is always greener on the other side; I’m sure many of us (myself included) sometimes admire the excitement that changing seasons bring. Waiting for the first snowfall, or for the wild flowers to bloom in the meadow.

In fact, we do have variations in our weather even though the changes are not as dramatic as temperate regions. We have our Northeast monsoon, Southwest monsoon, inter-monsoon period, Sumatra squalls, etc. Even within the monsoon season we have wet phases and dry phases. Unfortunately this information is something that we read as children only in our geography textbooks for the sole purpose of examinations, forgotten two hours after the examination ends. We know it but don’t understand it. Most of us did not grow up living close to the land. We don’t rely directly on her for food through farming, foraging, fishing, and hunting. As such, the weather is just an inconvenience to be dealt with.

I found myself becoming much more aware of the weather and seasons ever since I started farming. For example, certain crops suit certain weather, or that the watering requirements would change, or the kind of weeds would change. However, it was in foraging that I realized how reliant one becomes on the weather. In farming, there is relatively more control: you can water more during the hot season, select suitable crops, provide more shade, etc. When one forages, the difficulty and beauty is that one has to accept and adapt. You submit to the changes of the environment and let Nature decide your menu, if there is any at all, for the day…

We forage for fern shoots quite a bit while living in Project Lui. There are a few types of edible ferns and the one we forage is (I think!) the vegetable fern, or paku pakis / pucuk paku in Malay (Diplazium esculentum). It is commonly eaten throughout Asia and even in Hawaii. They thrive in wet soil and partially shaded areas.

We were lucky to find a patch growing close to our house, at a small seasonal wetland. The depression in the land is saturated with water during the rainy season, turning it into a small pond. After the rainy season, the water table becomes lower and the depression dries out. Our edible fern prefers moist soil but cannot tolerate flooded soil. When the wetland is flooded, a submerged aquatic fern called the water sprite (Ceratopteris thalictroides) takes over. And so it goes with the season that the edible fern advances when the wetland dries up and retreats when the rains return. It’s a slow dance between the two ferns. 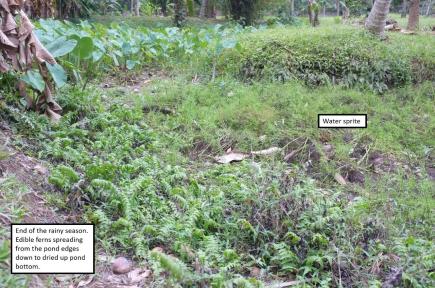 A typical dish in Malay traditional cuisine is to cook the ferns in a thick, savory coconut milk gravy tinged yellow with turmeric (pucuk paku masak lemak). We sometimes cook the fern in a herbal broth, a recipe courtesy of an Indonesian friend. The broth includes herbs like turmeric leaves, kaffir lime leaves and holy basil, and is often cooked with shredded banana inflorescence.

Read more about what we do at Project Lui here.

4 thoughts on “Foraging for Fern Shoots with the Seasons”