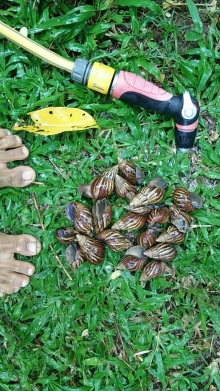 Twenty snails harvested in a few minutes on a drizzling day

Yes they are. We have eaten them a few times over the past months. The snails at Project Canossian have been munching away at our seedlings and we thought that the best way for pest control would be to introduce a natural predator – the Homo sapiens. In a more diverse ecosystem, we would probably get more natural predators like ducks, lizards, beetles, birds, snakes, etc. However this is not common in an urban area surrounded by lawns.

A favorite permaculture adage is “the problem is the solution“. And as Bill Mollison says “You don’t have a snail problem, you have a duck deficiency!” Over here, our duck deficiency is solved by some very omnivorous human beings.

To be accurate, these are the common snails you see all over Singapore. The kind you might have stepped on accidentally after a rainy day. They are known as African Land Snails (Achatina fulica). Before attempting the African Land Snails, we have actually tried eating the very invasive Golden Apple Snails (Pomacea canaliculata), commonly found at the reservoirs with their pink eggs along the water edges.

In an urban garden that does not have any livestock, these garden snails are the only source of meat. In fact, they are said to be very healthy because they are low in fats. If you are looking to be more self-sufficient in food, these snails are a great addition to all the greens for a whole diet. Not to mention they are free-range, organic, wild foraged, hand-picked, and “add any fancy marketing term here“.

How and Where to Harvest

Snails are very easy to harvest because they are slow, like a snail. Just handpick them during a wet day where they seek higher and drier grounds. They have some favorite hiding spots, once discovered, make for some easy harvesting. We found that they really like going into our irrigation box. Every time we open it there can be up to ten snails inside. Another easy spot would be the top of the papaya trees.

Can you spot 7 snails in this irrigation box?

How to Prepare Them

Some people suggest starving or feeding them in captivity for one or two days to clear their gut of whatever rubbish they have been eating. A friend told me that snails frequently eat feces. Gordon Ramsay suggests feeding them carrots and you know they are clean when they start having orange poop.

However we didn’t do that because starving feels quite cruel. We were also lazy to keep feeding them to empty their pee and poop. We also know that our garden is relatively free of chemicals and nasty stuff. We trust that thorough cooking would rid all the parasites and harmful microbes.

How to Cook Them

The French eat their escargot off the shell, which means they cook and serve the snail with the meat in the shell. So far we have always removed the meat from the shell before cooking. To do so, you can put the snails in boiling water for 5 minutes to deal a quick death and then use a small pastry fork to pull the meat out.

Some people mind the slime but it is said to be healthy and no different from slimy vegetables like lady fingers or malabar spinach. We tried both with and without slime and don’t feel much difference. However you can get rid of the slime by soaking the meat in vinegar or rubbing salt.

Boiling the snails to remove the meat.

The broth turn brown and has an earthy taste and smell.

Marinating in vinegar and salt to remove the slime.

We were quite surprised to read that African land snails are actually a common food in many places, including Africa, China, Taiwan. That’s how they were introduced and got invasive in their host countries. African land snails are sometimes eaten raw in southern China and people do get parasites occasionally! In Taiwan, they are a tasty snack while drinking alcohol. They are stir-fried with rice wine, chilli, spices, vinegar, garlic, basil, etc. 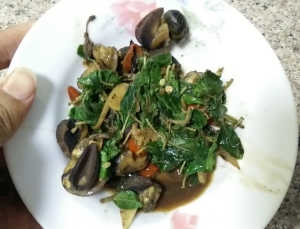 We have tried a few ways of cooking them: stir-fry with holy basil and chilli, butter-garlic-lime (French escargot way), dried chilli-soy sauce. They are all tasty and the snails are chewy. However you would not be tasting the actual snail. If you are daring, try boiling them in a plain soup with salt. We think they really taste like mushrooms!

WARNING: Not for the fainthearted or delicate stomachs! Eat at your own risk.

10 thoughts on “Are Garden Snails in Singapore Edible?”