During our stay at Maejo Baandin in Chiangmai, we met a couple who have been staying there for a while. Po is from Bangkok and Shiran is from Israel. They are both musicians and met in India when they were there studying classical Indian music. They have a small white dog that they adopted from the streets. 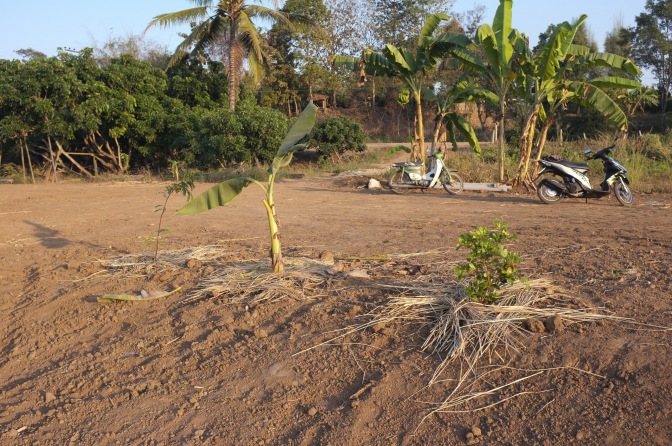 The entrance from the main road

They had recently bought a piece of land around Maejo village to – as Po puts it – retire on. Po was a music producer and had been in the music industry in Bangkok since he was a university student. He eventually became very jaded of the superficiality and commercial aspect of the industry that he moved to a remote island in Thailand. He has traveled around quite a bit and was even a forest monk for a year. Po might seem very old from my description but he is only in his early 30s. He laughs readily and his humour is eccentric. When offered an ice-cream by a young boy, he exclaimed: “No I can’t eat that, I’m a rockstar!

The 5-rai (almost 2 acre) land was previously a rice terrace and they plan to build a house and start a farm. The soil was recently leveled and some deep ponds and canals were dug by an excavator. Unlike the wet tropics like Singapore and Malaysia, Chiangmai is in the subtropics and has a distinct wet and dry season. There is a need to store water to tide through the dry season and they have made ample preparation for that. 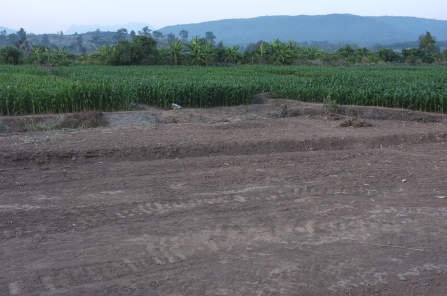 Their land extends up to the corn field

One of two deep ponds for water storage.

The land is very flat.

The sides are very steep, probably too steep for beneficial animals like frogs. However the steepness gives more volume for water storage. It’s a tradeoff.

Deep canals were dug to bring water from the main canal to the ponds. 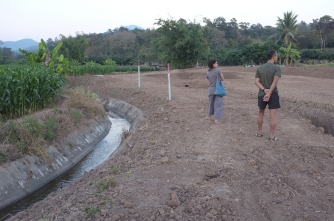 The concrete walled canal is shared between the fields.

After the pond started filling up with water from the ground, they noticed that the water did not look very clean. It was green and had algae growing on the surface. It was not a good sign as ground water is usually clean. The reason could be because of the use of chemical fertilizers on the fruit orchard and corn field that they were sandwiched between. The chemical fertilizer gets leached into the soil or river whenever it rains. The excess nutrients in the water might cause an algae bloom which in turn depletes the oxygen supply (eutrophication). This is not good for the aquatic animals. I suggested throwing in some aquatic plants like water hyacinths or water lettuce to suck up the excess nutrients. These fast growing plants can then be used as animal feed or composted.

The corn field beside is farmed using chemicals and pesticides.

You can see a small plant that they tried to plant at the edge to cleanse the pond.

The next step was to start planting out the big piece of land. They wanted to do a food forest since it requires less maintenance. Po intends to work hard in the beginning years of the farm and then sit back and relax when the trees are established. We went tree shopping at the nursery around Chiangmai and it reminded me so much of my job at Edible Garden City back home in Singapore. It’s funny that I am supposed to be on vacation but I am still kind of working. 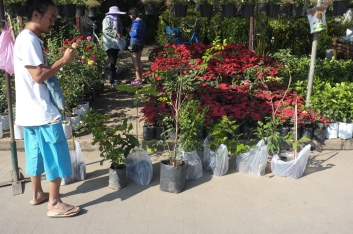 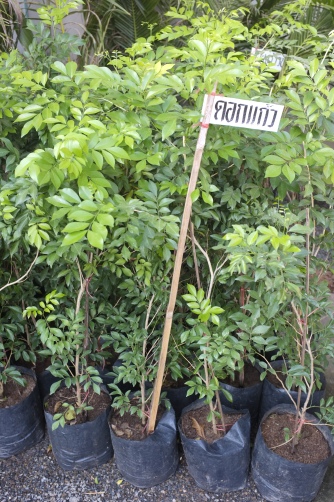 I am not sure what this is but I have seen it used as a living hedge in Bali.

Sorry to make you suffer plants!

To be honest, we would be better off planting the trees during the wet season. It’s an uphill battle trying to establish the trees in the middle of dry season but we were too enthusiastic and couldn’t wait. Mulching would be essential and we were fortunate that there was a big bundle of rice straw left over from the rice harvest.

Po and Shiran did mulch a little a while back. After this we added even more.

All planted out and mulched!

The whole roll of small trees planted and mulched. We watered them from the canal on the right.

Hopefully, when I return after many years, the trees would have grown big and be producing abundantly…

Po and Shiran had sowed some soybeans a while back as ground cover and green manure. They were growing up nicely. We helped to sow even more around the baby trees in hope that they help the trees grow better.

Direct sowing the soybeans. Usually I would just broadcast them!

We sowed the soybeans around this coconut sapling.

The patch of soybean along the canal.

Watering them with an ingenious bamboo scooping device.

Compared to the previous photo, the area here gets more sun and therefore more grass competing with the soybean.

Po and Shiran bought an old wooden house for their land. It is over 50 years old but still in decent condition because it is made of teak. During the day we left Maejo village, the house was dismantled and then delivered to them as a pile of wood. They plan to re-assemble the house within a few days. How amazing! Unfortunately we were not able to see the complete house this time round… 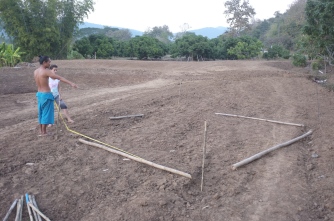 Planning where the house is sited.

One thought on “Starting a Food Forest on New Land”

Join 115 other followers
Follow INTO THE ULU on WordPress.com