I read Gaia’s Garden by Toby Hemenway a few months back. I think it’s a good time to give a brief review now that I have given all my learning and thoughts time to settle and synthesize. I don’t have the book beside me for reference and I am only recalling from memory the elements that struck me most.

I found this book in the library after searching for “permaculture” in the catalog. It is probably the most popular permaculture book that has been written in recent years. To be honest, I was quite impressed that the Singapore library actually has books on permaculture considering how alternative it is. There is an element of subversiveness in permaculture, as Bill Mollison said it himself. When he heard a reviewer describe his teachings as seditious, he said:

Yes, it was very perceptive. I teach self-reliance, the world’s most subversive practice. I teach people how to grow their own food, which is shockingly subversive. So, yes, it’s seditious. But it’s peaceful sedition.

Well, it definitely does not look subversive from the cover of the book!

Lets start with what the book is not. Gaia’s Garden is not a Gardening 101 book for beginners. It does not describe what NPK is, the differences between clay and sand, how much greens or browns to add into your compost pile. If you are looking for this kind of information there are many books out there but that does not include Gaia’s Garden.

This book is more suitable for those who have had some experience in growing your own food and know what permaculture is. I enjoyed the first few chapters the most. Hemenway started with native plants vs non-native (exotic) plants. Hemenway is from North America and it seems like there is a strong movement there to support the native species and eliminate the invasive ones from foreign land. I have to admit that I am a little puzzled by it. What really is native over here in Singapore? One of my favourite trees here in Singapore is the rain tree. You see them along the roads all over our island. Other than having a majestic structure, its wide canopy provides a lot of shade in hot and sunny Singapore. It makes walking much more pleasant. The rain tree is also a legume and fixes nitrogen into the soil.

So where does that leave us? Hemenway’s stance is that he is a supporter of native species but he also says that exotic species get to intrude only because there is a gap or niche for them. This niche is usually created whenever there is a disruption to the ecosystem. Many of these disruptions today are caused by humans. Whenever we clear a forest we are creating a niche for shorter plants that typically do not thrive underneath the thick canopy of a forest. When humans erect a dam across a river, we create certain conditions that are somehow now more amicable to an invasive fish species than the native fish species. However when some naturally recurring situation arises that tips the balance scale, the native species might thrive over the invasive species again. For example, earlier this year during the drought, a large number of non-native invasive fish species like tilapia were found dead in a river canal, floating on the surface. Apparently they did not have the biological mechanism to survive in a low oxygen environment.

We see grass everywhere in Singapore. They are so hardy and impossible to eradicate by weeding. However, a friend told me once that the type of grass that we see everywhere is actually not native to Singapore. It does make sense if you walk into a rainforest. Where do you see grass?

This brings us to another topic that Hemenway addresses, that of pioneer species and succession. The grass that so many gardeners all over the world hold a vengeance against is actually nature’s first step to restoring life! One of the most memorable lines in the book says (roughly since I don’t have the book with me now) that on any piece of land that receives sufficient rainfall, nature will eventually restore it to a forest. Grass grows only in situations when a forest has been disrupted. On bare soil, grass will be the first to grow over it. It protects the soil like skin over bare flesh. Grass shields the soil from sun and rain; grass retains moisture in the soil; grass prevents soil erosion; grass creates a habitat for insects. Depending on how badly damaged the soil was, grass will eventually give way to taller grass or short shrubs when the soil has restored sufficient fertility. After many years as the shrubs get taller, trees will start growing and growing into a forest.

So then, what exactly are we doing when we pull out grass from the soil? We are merely stalling nature’s attempt to restore life. For that, nature will fight back by seeding more grass. If you continue fighting, you will be stuck in a perpetual cycle of offsetting the natural way of things. You are paddling a boat up the waterfall. I see it happen in gardens all the time and it only drains the fun out of gardening. In other posts, I suggest some less painful solutions to deal (or not deal) with grass.

Lastly, Hemenway introduced something quite new to me – guilds. Guilds are plants, insects, and animals that work well together. I have heard of companion planting (eg tomato and basil goes well together) but guilds bring it to another level. A simple guild would be the ancient three-sisters guild originating from native South Americans – corn, bean, and pumpkin. The corn provides a trellis for the bean to climb on, the bean fixes nitrogen into the soil, and the pumpkin provides ground cover. All three plants benefit from one another and yield more together than if grown separately. Hemenway also suggested a fourth sister!

I was most impressed by the tree-centered guilds. It creates a fairly mature ecosystem around a fruit tree. He gave some examples in the pictures below. 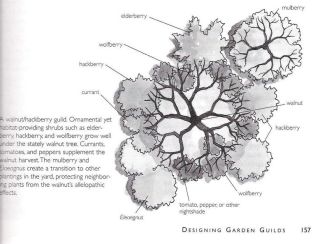 Unfortunately both these examples are for the North American temperate climate where Hemenway is from. That’s my only gripe about the book. There is so much good information and examples but they are not for the humid tropics. The book has many appendices with detailed plant list, edible weeds, etc but mostly for a temperate climate. I only wish that we have such good information relevant to the tropics…

One thought on “Book Review: Gaia’s Garden by Toby Hemenway”