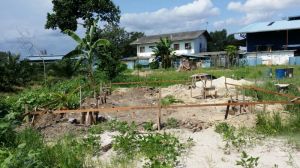 A family friend has asked me to help start an organic farm in the premises of a timber factory in Johor Malaysia. I am calling it Project Nanas because nanas means pineapple in Malay. The location of this factory is at Pekan Nanas which literally means Pineapple Town. This place used to produce the most pineapple throughout Malaysia! Interestingly, many European languages (including German, French, Norwegian, Hungarian, Greek, Finnish, and probably more) call pineapple “ananas”.

The objective of this farm is to provide employees with fresh vegetables and also green up the premises. The factory is currently expanding and constructing a warehouse. A long and narrow strip of land that is sandwiched between this new warehouse and a river is where the farm will be.

This update is the first and shows what has happened over the past few months. Other than some machine works like soil leveling and pond digging, not much human intervention has occurred since the warehouse will need to be completed first. However it’s interesting to observe what nature has been up to!

A few months back when I first visited the soon-to-be farm, the ground has just been leveled. Big machines were pushing soil around and clearing vegetation. The ground was bare but I could see that the soil was fertile with good tilth as the land was covered with dense vegetation previously without human presence. I thought that the immediate task was to protect the soil from the baking sun and torrential rain. For land of this size, a practical way to do this is through green manure.

I went to the local Indian grocery store and bought a variety of beans including green (mung) beans, cowpea, black-eyed pea, peanuts, and a bunch of beans that I forgot the names of! These legumes are known to grow easily in poor soils in the tropics without much water. They will help to create vegetation to protect the soil, smother grass, and also fix nitrogen into the soil.

Here is what happened after I walked around throwing beans into the air like a monk conducting a ritual. 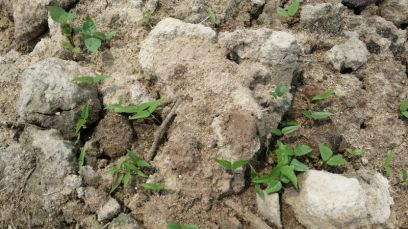 It was raining quite a bit and the beans sprouted after a week. 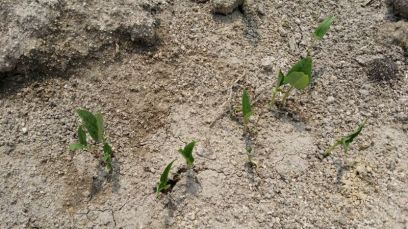 More bean sprouts. The soil has already been eroded by the rain and the big sandy particles are what is left behind. 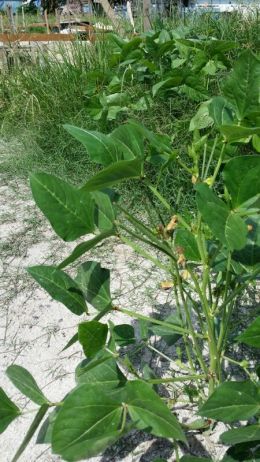 After a month or so, the beans started fruiting and the workers were eating them. Look at the bare soil turning more sandy. 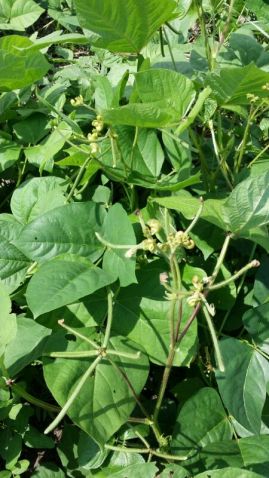 The beans look very similar and it is only when I open the pods that I can tell what kind of beans they are. 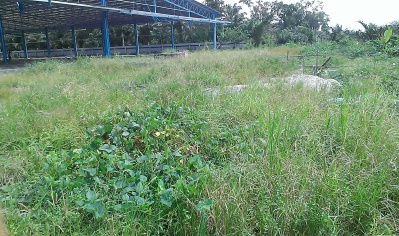 You can see that the green manure did better in certain areas while in some areas the grass took over. 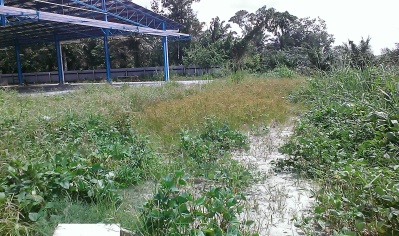 Soil that was left bare was leached to a white sandy mix.

Look how fast the grass takes over bare soil! Grass is nature’s best weapon for protecting bare soil and the first step to restoring fertility. Toby Hemenway in his book Gaia’s Garden mentioned that every plant has a niche. This is definitely the perfect niche for grass. Full sun plus bare soil. Our green manure legumes do ok here but not as well as the grass. From this grassland, nature will slowly but surely restore this back to a more mature ecosystem in the form of a rainforest. 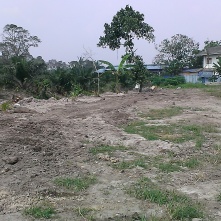 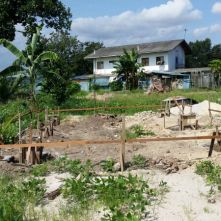 After a few weeks… 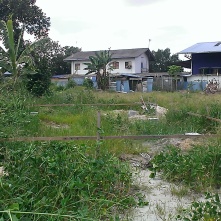 After a few months…

The first time I was there I recommended that they save some space for a wildlife pond. The second time I went there and there it was! A pond at the farm helps to store water and adds biodiversity by providing a habitat for friends like frogs, dragonflies, etc.

Looking at the way they have done it, they were probably thinking more about water storage. The sides are too steep and frogs or small animals might have difficulty getting in/out and drinking from it. The bottom is very deep which is great for storing water but the uniform depth does not allow a variety of aquatic plants. Different plants prefer different depth. In a natural or naturally-designed pond, the bottom will be gently sloped and different plants, fish, and insects will thrive at different parts of the pond.

The shape of the pond is a boring rectangle, like a swimming pool. There is not much pond edge compared to a curvy odd-shaped pond. Edge is a natural phenomenon (eg pond-to-land edge, sky-to-earth edge, forest-to-grassland edge) that supports more life than the habitats on either side of the edge. For example, at the edge of sky and earth is the surface of the earth, and it is this edge that supports more life than the core of earth or the middle of the sky. 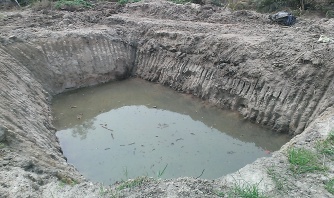 A pond was created by a digger without using concrete or liner. The pond is very deep but I am not sure the exact depth because it was already filled when I saw it. 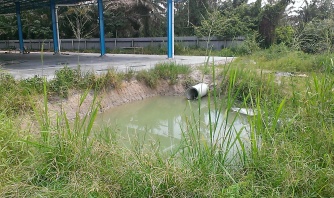 This is the same pond after a couple of months with grass on the sides. A pipe has been added to direct rainwater harvested from the warehouse roof into the pond. Another pipe on the left (that you can’t see) is the overflow. It leads to the river about 10m away.

Until the next time!